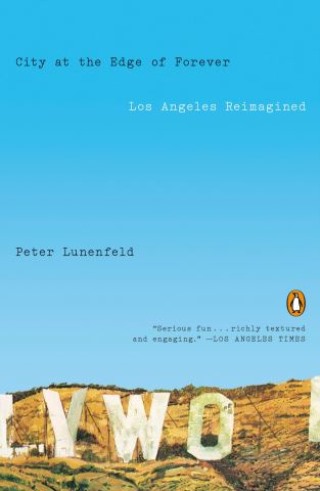 City at the Edge of Forever

How did Los Angeles start the 20th century as a dusty frontier town and end up a century later as one of the globe's supercities - with unparalleled cultural, economic, and technological reach? In City at the Edge of Forever, Peter Lunenfeld constructs an urban portrait, layer by layer, from serendipitous affinities, historical anomalies, and uncanny correspondences. In its pages, modernist architecture and lifestyle capitalism come together via a surfer girl named Gidget; Joan Didion's yellow Corvette is the brainchild of a car-crazy Japanese-American kid interned at Manzanar; and the music of the Manson Family segues into the birth of sci-fi fandom.

One of the book's innovations is to brand Los Angeles as the alchemical city. Earth became real estate when the Yankees took control in the nineteenth century. Fire fueled the city's early explosive growth as the Southland's oil fields supplied the inexhaustible demands of drivers and their cars. Air defined the area from WWII to the end of the Cold War, with aeronautics and aerospace dominating the region's industries. Water is now the key element, and Southern California's ports are the largest in the western hemisphere. What alchemists identify as the ethereal fifth element, or quintessence, this book positions as the glamour of Hollywood, a spell that sustains the city but also needs to be broken in order to understand Los Angeles now.

Lunenfeld weaves together the city's art, architecture, and design, juxtaposes its entertainment and literary histories, and moves from restaurant kitchens to recording studios to ultra-secret research and development labs. In the process, he reimagines Los Angeles as simultaneously an exemplar and cautionary tale for the 21st century.

Peter Lunenfeld: Peter Lunenfeld is vice chair of UCLA's Design Media Arts department, and a faculty member in the Urban and Digital Humanities programs. He has published award-winning essays and several books with the MIT Press about the ways in which art, design, and technology intertwine. He has lived in Southern California for over thirty years.