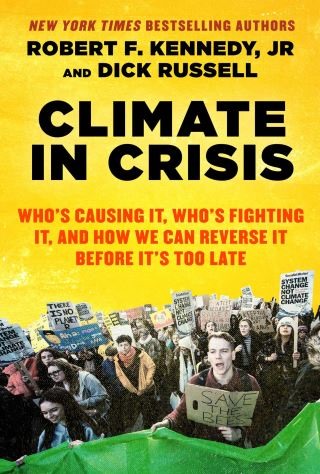 Who's Causing It, Who's Fighting It, and How We Can Reverse It Before It's Too Late

The science is overwhelming; the facts are in. The planet is heating up at an alarming rate and the results are everywhere to be seen. Yet, as time runs out, climate progress is blocked by the men who are profiting from the burning of the planet: Energy moguls like the Koch brothers and ExxonMobil CEO Rex Tillerson. Powerful politicians like Senators Mitch McConnell and Jim Inhofe, who receive massive contributions from the oil and coal industries. Most of these men are too intelligent to truly believe that climate change is not a growing crisis. And yet they have put their profits and careers ahead of the health and welfare of the world’s population—and even their own children and grandchildren. How do they explain themselves to their offspring, to the next generations that must deal with the environmental havoc that these men have wreaked?

With a new introduction from the authors, Climate in Crisis takes a very personal look at this global crisis, literally bringing it home.

Robert F. Kennedy: Robert F. Kennedy, Jr. is a New York Times bestselling author and one of the nation's leading environmental activists. His writing has been included in anthologies of America's best crime writing, best science writing, and best political writing. He is president of Waterkeeper Alliance, the world's largest clean water advocacy group; a professor of environmental litigation at Pace University Law School in White Plains, NY; and a senior attorney at the Natural Resources Defense Council. Mr. Kennedy is a former Assistant District Attorney in Manhattan. He cohosts thre weekly radio show Ring of Fire.|||Dick Russell has written for such varied publications as Time, Sports Illustrated, and the Village Voice.His books include The Man Who Knew Too Much, Black Genius, and On the Trail of the JFK Assassins. He is also the coauthor of several New York Times bestsellers, including American Conspiracies, 63 Documents the Government Doesn't Want You to Read, and They Killed Our President.