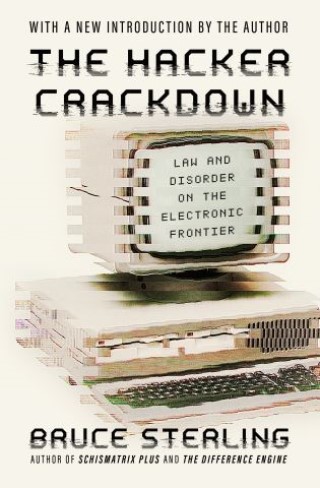 Law and Disorder on the Electronic Frontier

The bestselling cyberpunk author “has produced by far the most stylish report from the computer outlaw culture since Steven Levy’s Hackers” (Publishers Weekly).

Bruce Sterling delves into the world of high-tech crime and punishment in one of the first books to explore the cyberspace breaches that threaten national security. From the crash of AT&T’s long-distance switching system to corporate cyberattacks, he investigates government and law enforcement efforts to break the back of America’s electronic underground in the 1990s. In this modern classic, “Sterling makes the hackers—who live in the ether between terminals under noms de net such as VaxCat—as vivid as Wyatt Earp and Doc Holliday. His book goes a long way towards explaining the emerging digital world and its ethos” (Publishers Weekly).

This edition features a new preface by the author that analyzes the sobering increase in computer crime over the twenty-five years since The Hacker Crackdown was first published.

“Thoroughly researched, this account of the government’s crackdown on the nebulous but growing computer-underground provides a thoughtful report on the laws and rights being defined on the virtual frontier of cyberspace. . . . An enjoyable, informative, and (as the first mainstream treatment of the subject) potentially important book . . . Sterling is a fine and knowledgeable guide to this strange new world.” —Kirkus Reviews

“A well-balanced look at this new group of civil libertarians. Written with humor and intelligence, this book is highly recommended.” —Library Journal

Bruce Sterling:
Bruce Sterling is an American author and one of the founders of the cyberpunk science fiction movement. He began writing in the 1970s; his first novel, Involution Ocean, about a whaling ship in an ocean of dust, is a science fictional pastiche of Herman Melville’s Moby-Dick. His other works, including his series of stories and a novel, Schismatrix, set in the Shaper/Mechanist universe, often deal with computer-based technologies and genetic engineering. His five short story collections and ten novels have earned several honors: a John W. Campbell Award, two Hugo Awards, a Hayakawa’s SF Magazine Reader’s Award, and an Arthur C. Clarke Award. Sterling has also worked as a critic and journalist, writing for Metropolis, Artforum, Icon, MIT Technology Review, Time, and Newsweek, as well as Interzone, Science Fiction Eye, Cheap Truth, and Cool Tools. He edits Beyond the Beyond, a blog hosted by Wired.

Sterling is also involved in the technology and design community. In 2003 his web-only art piece, Embrace the Decay, was commissioned by the Museum of Contemporary Art, Los Angeles, and became the most-visited piece in the museum’s digital gallery. He has taught classes in design at the Gerrit Reitveld Academie in Amsterdam, Centro in Mexico City, Fabrica in Treviso, Italy, and the Art Center College of Design in Los Angeles. Sterling lives in Austin, Texas; Belgrade, Serbia; and Turin, Italy.